Complete your essay and design a visual synopsis of your publication, to include the following:

Your final design should include some or all of your full 3,000-word text and original, self generated images and export as a PDF.

Include your complete 3,000 word article, story or essay at the back of your PDF.

Write a short paragraph about the methods by which you might fund, promote and launch your project, if you were an independent author.

My initial idea for this project was a magazine interview with a fictional character. I hadn’t fully thought out the ramifications of the word count, so I ended up with a much more sprawling interview, folding in my research and expanding on the original topic quite a lot. It also shifted the tone of the magazine, I had originally intended a shorter and snappier tongue in cheek interview which would have suited a more mid-market gossip or fashion magazine. Instead it is a longform editorial with moody atmospheric photos and a more intelligent, inquisitive tone. I was still approaching the conceit as if it were a magazine written by and for incryptids and mythological creatures, but in examining the realities of promoting, funding and launching this as a real project I’ve come around to thinking about it as a real project. Mythologie could be a real publication, home to articles about mythology and folklore from around the world, speculative fiction, poetry and lush imagery. All I would need to do is change the tagline from “For the discerning incryptid” to “For the discerning incryptid Enthusiast”. It would need a huge amount of collaboration, authors, illustrators, photographers and editors, but could be launched online as a publication, with open submissions, and then rolled out as a quarterly or semi annual printed edition. Another possibility would be limiting the project to a specific number of editions rather creating an ongoing project, with higher production values and less pressure to be constantly looking for content.

There has been a recent boom of new publications including Beneath Ceaseless Skies (BCS), a non-profit literary fantasy magazine, or Fireside Press. Originally an online magazine, it is now its own press publishing novels and novellas. In 2016 Fireside published a report on the state of Black speculative fiction, which prompted the formation of Fiyah magazine a literary magazine featuring stories by and about Black people of the African Diaspora. A combination of crowd sourcing, advertising revenue, small subscription fees or donations through sites like Patreon all can support a project like this. Initial funding would be crucial, as paying collaborators fairly for their work is incredibly important.

My biggest challenge this week was photographs. Given time and a budget, I would have liked to hire a photographer and a model, rather than trawl through stock photos trying to cobble together models who looked similar enough to work for my layout. It was important that the visuals be photos and not illustrations or pure typography work as the narrative conceit of the essay is grounded in the idea that the Mermaid of Zennor is a real person I am interviewing. High contrast black and white fashion photos were needed, which necessitated a great deal of photo manipulation and comps. I am reminded again of how photography is such an important part of graphic design, and the importance of professional collaboration when your own skills lie in a different direction. I had been able to visit the village during lockdown, but everything was closed. Luckily I had photos of the Mermaid Chair and the location in my own photo collection from previous trips to Zennor.

I needed photos that could look like the same model, and after searching extensively I managed to find a handful I could work with on Unsplash. The first photo had already been manipulated, created by Alice Alinari, an artist who specialises in otherworldly fairytale photo edits. Starting with an underwater shot I was able to add a tail, paint in new lighting and shadows and change the model’s dress to match another image I had sourced.

The second photo featured a flowered dress, which I was able to paint onto the other photos using layer masks and blending techniques. I had to build a new bodice and add the ribbon. 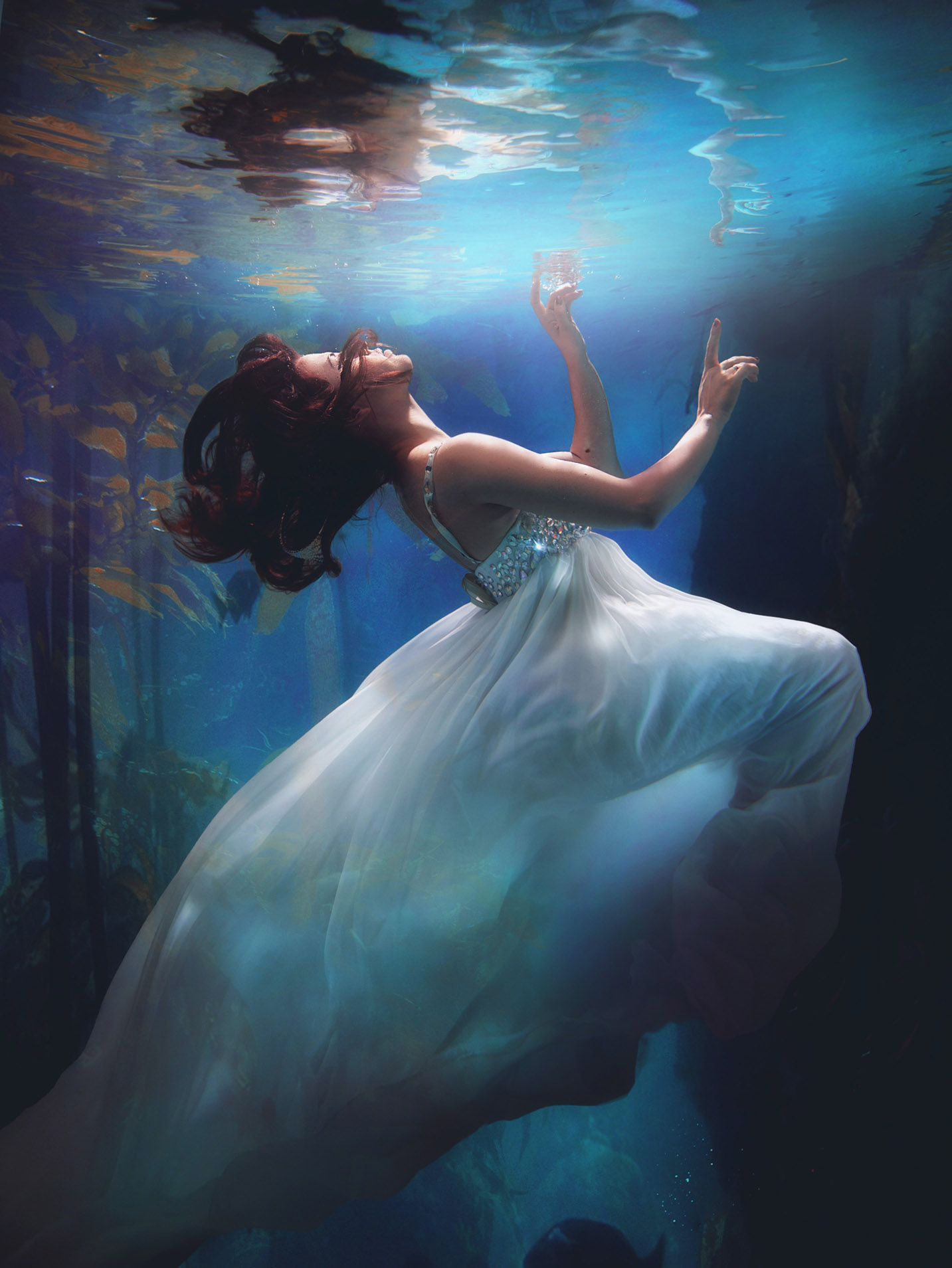 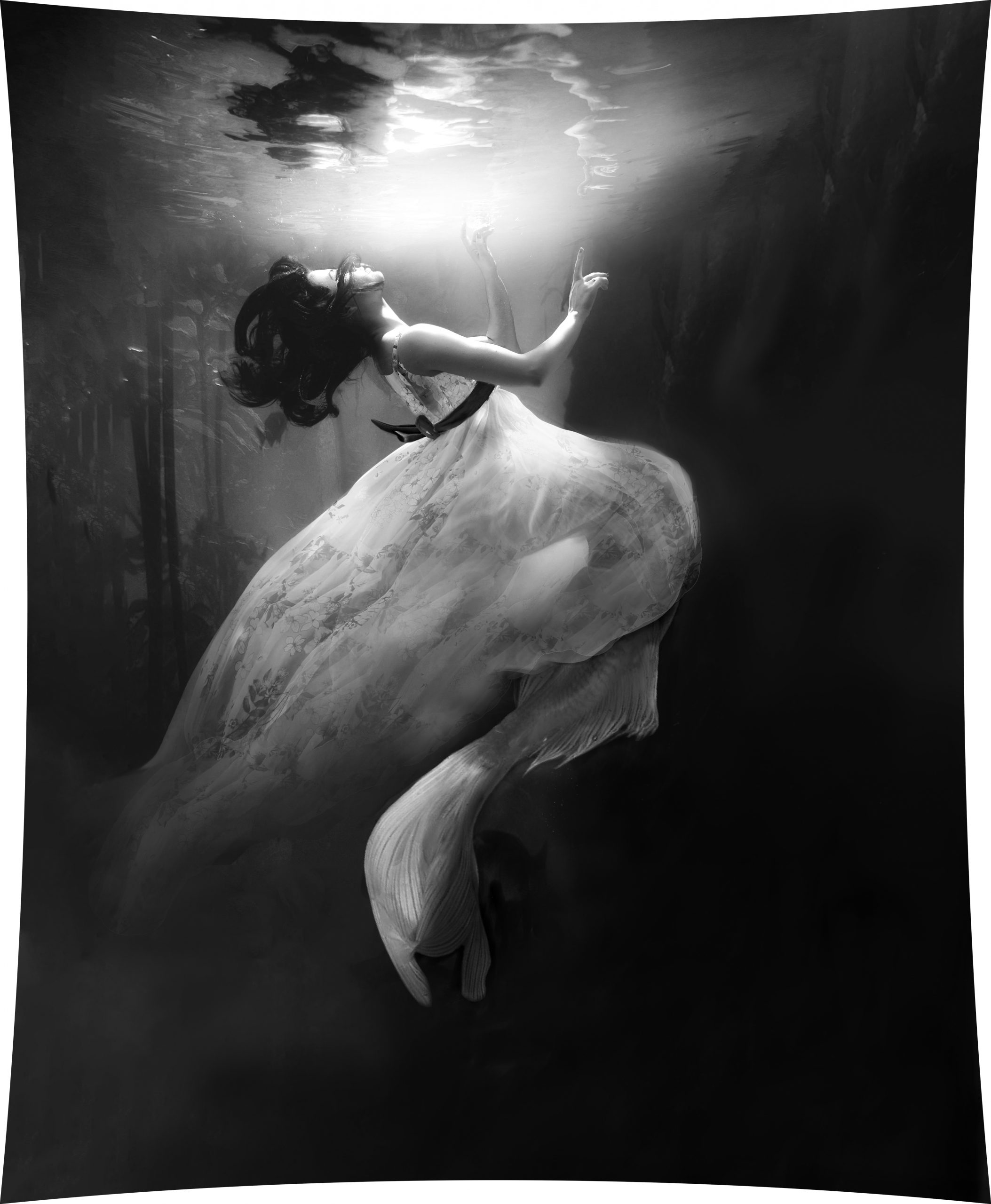 The second photo didn’t need as much work, I lightened the dress and made it softer to suggest it was made of lighter fabric. 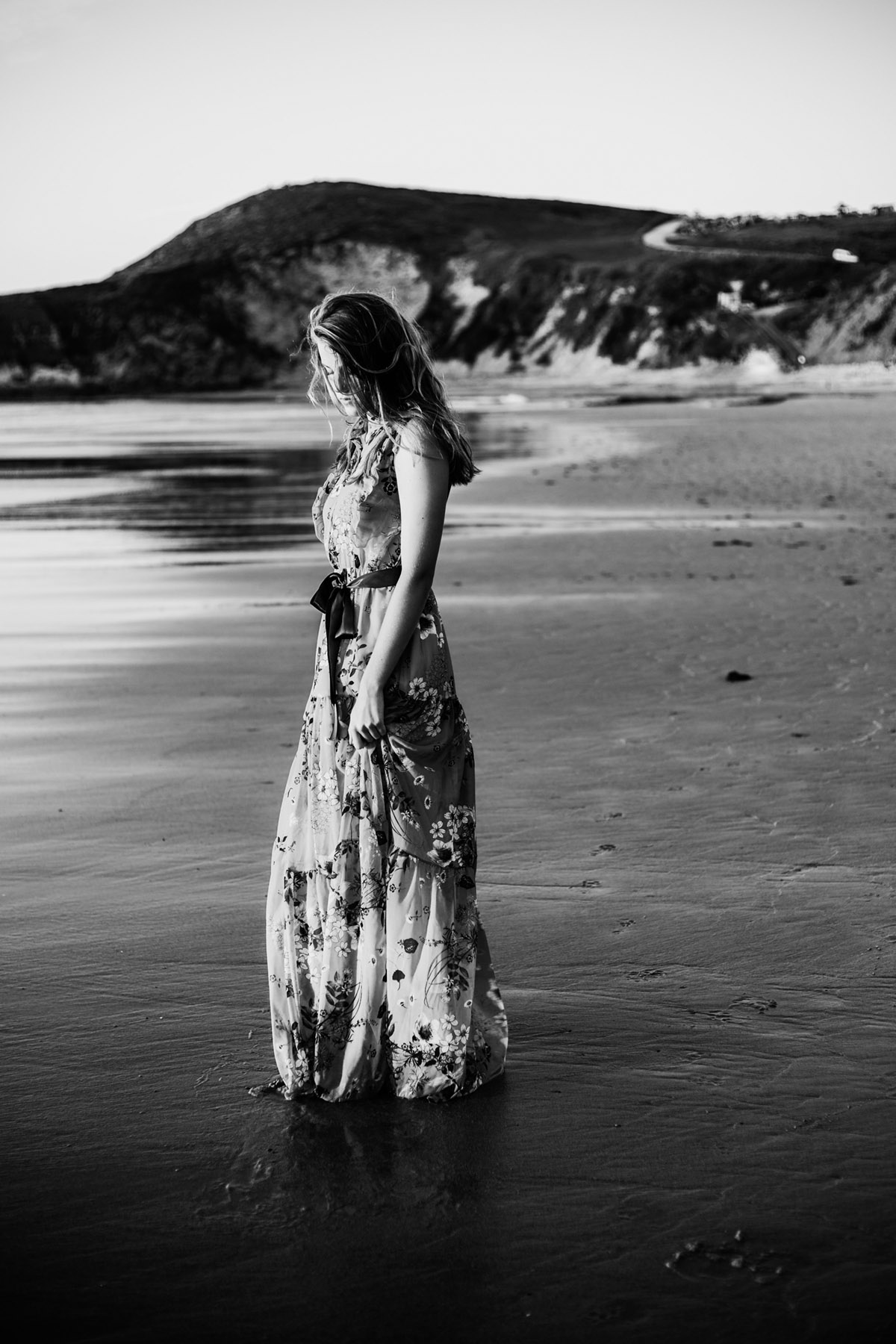 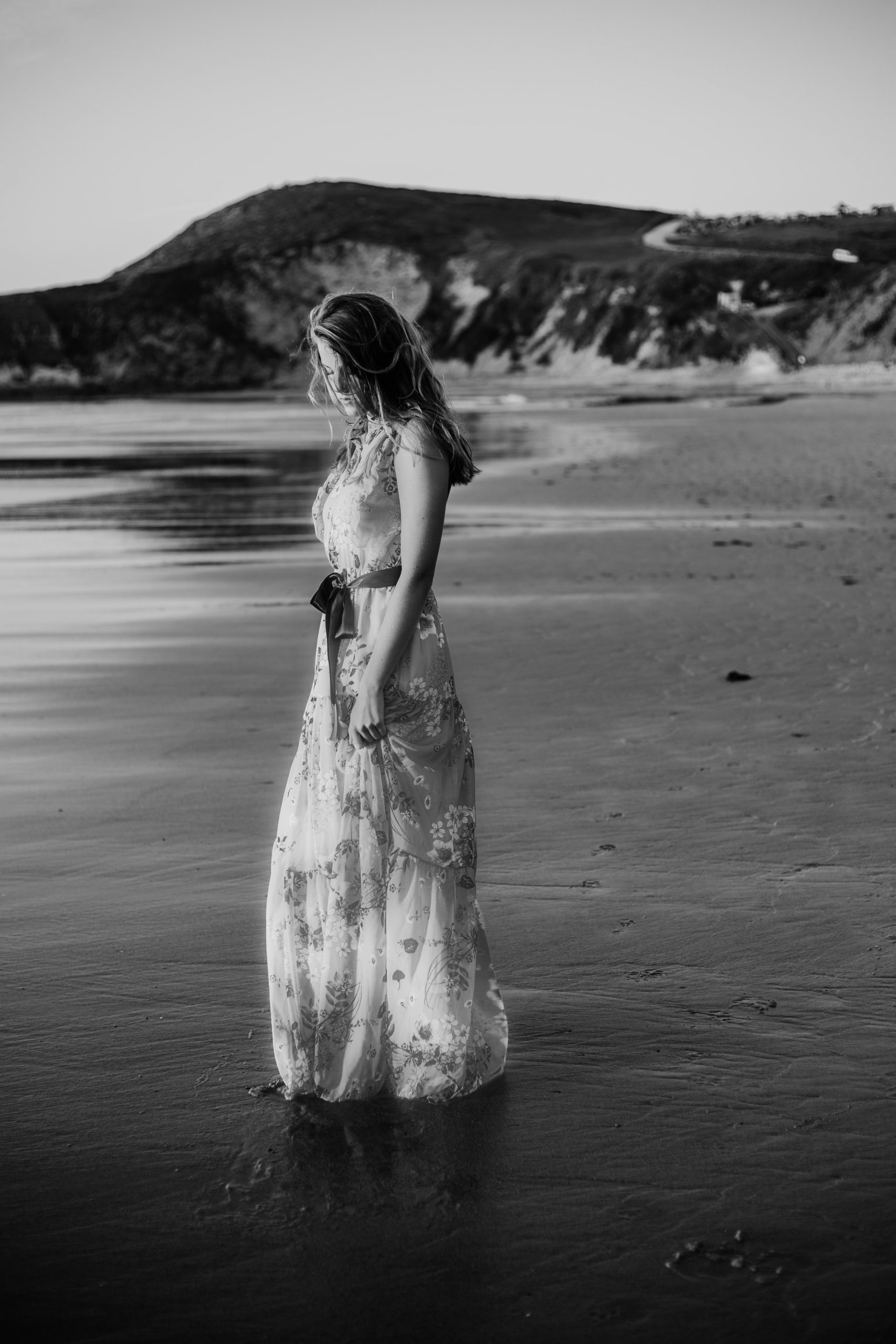 On the third photo I was quite sad to remove the model’s freckles and lose the beautiful soft colours from the original. I added the floral pattern and removed the small bow on the front of the dress. 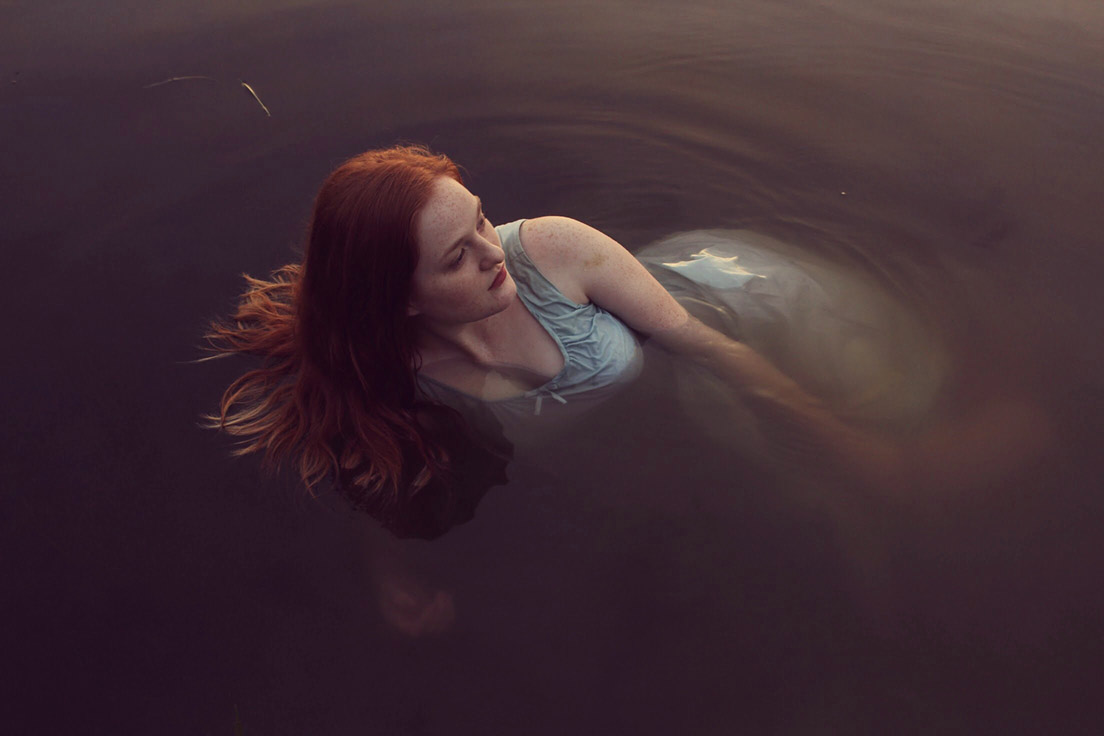 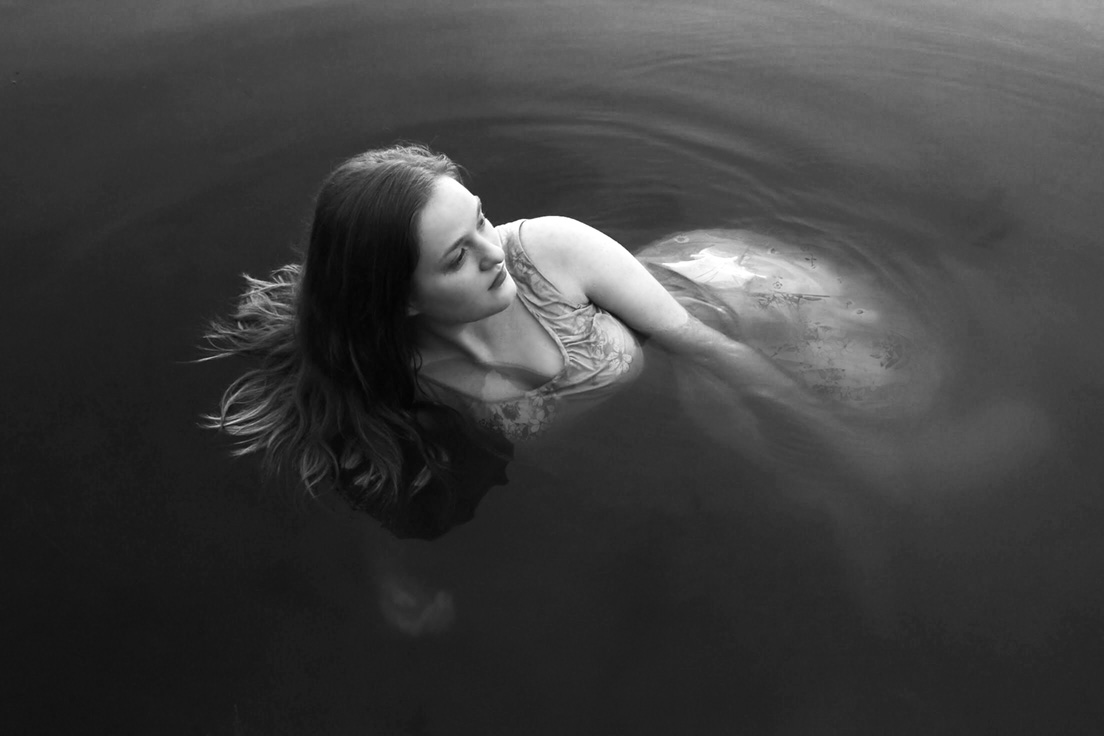